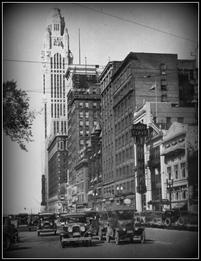 Downtown Columbus, Ohio, 1930, where both the real and  fictional Sarah worked in a department store during the Great Depression.

FOREIGN GIRLS opens in 1930. Sarah, who was a teenager in ALMOST AMERICAN, is now twenty-one.

The Great Depression looms on the horizon. Her parents’ marriage fractured years ago. Through sheer will and determination, Sarah's mother manages to hold onto the grocery store she acquired with the money from her divorce. Sarah’s gift with numbers finally pays off, too. She has a job. She has a future.

But there are problems. Widowed and broke, Sarah’s estranged father abandons his stepdaughter to his first family (this episode appears as "Another Mouth" in THE ROARING 20s: A Decade of Stories). Sarah falls in love with the wrong boy and helps a friend through a traumatic abortion. Her older sister secretly marries a Catholic, unthinkable for an Orthodox Jewish woman in the 1930's, and Sarah is caught in the middle of the ensuing battle.

Bad news arrives from Europe. Hitler is on the rise. Sarah’s dear friend lives in Berlin under the threat of growing anti-Semitism. Hers is one of several letters throughout the book that pose a new set of challenges for Sarah.

At the end of this most important year, Sarah makes a choice that will change her life forever.